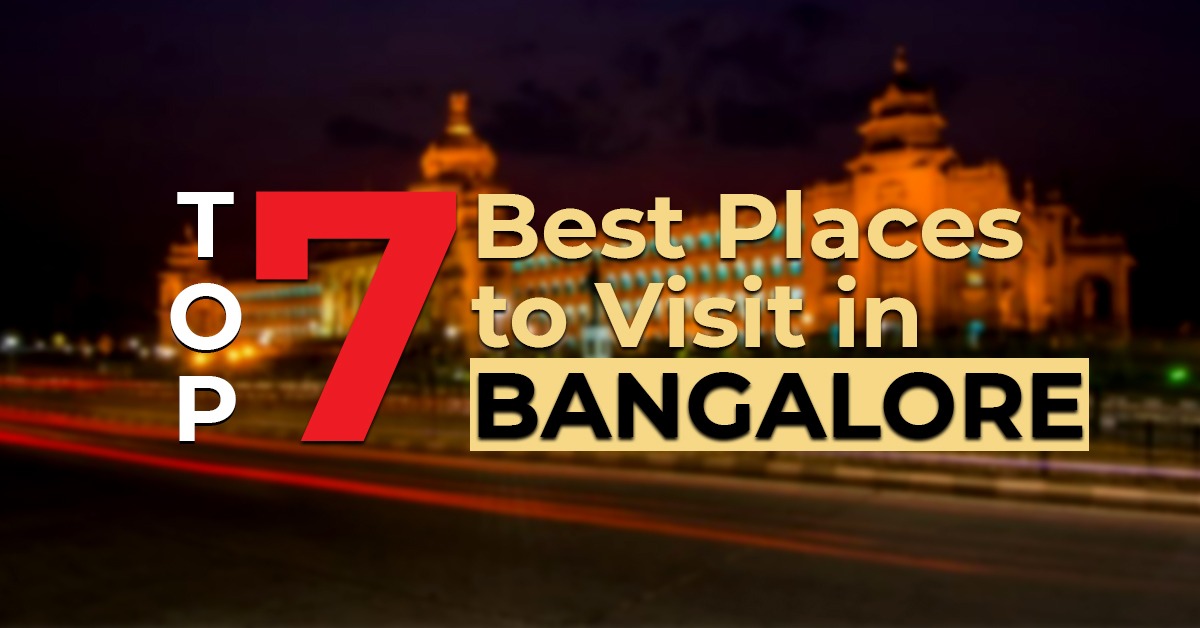 Exploring a city as big as Bangalore can get intimidating, but worry not, we’ve got you covered. There are various beautiful and at the same time adventurous places in Bangalore for you to visit and have a good time.

In recent years, Bangalore has earned multiple names like Silicon Valley of India, the Garden City, and Air-Conditioned City. Before the IT industry made this place its hub, Bengaluru was popularly known as the Pensioners’ Paradise. But today, it is a blend of both past and present. It does offer some terrific sightseeing locations to visit. Here is a list of the seven best places to see in Bangalore.

Cubbon Park, also known as Sri Chamarajendra Park is one of the famous landmarks of Bangalore. It was originally created in the year 1870 by Richard Sankey, who was Mysore’s British Dominant Engineer at that time. The park covers a land of 300 acres with abundant flora and fauna coupled with various aesthetically located statues and buildings of renowned personages within its precincts. Surrounded by massive green lawns and huge trees, this is one of the magical places to see. The park becomes even more mesmerizing to see during evenings after the beautiful lights are turned on.

The royal summer fort of the popular king “Tipu Sultan” is now transformed into a beautiful museum, and is certainly one of the best places to visit in Bangalore with kids. With old paintings, magnificent figures, and other remarkable artworks, this palace has gained a lot of popularity in recent decades. Despite being a renowned historical construction, one of the unique features of the fort is that it is built using pure teakwood, something that is rare to see in today’s world.

A good place to see in Bangalore with friends and family is the National Gallery of Modern Art. Established in 2009, the gallery displays some of the extraordinary house paintings and modern art created by popular contemporary artists. It houses about 500 exhibits, which are spread across spacious halls, tiny rooms, and corridors. The exhibits are displayed based on the time period, categories they belong to, and artists who created them.

About 750 m long, Church Street in Bangalore is one of the busiest and most beloved streets, named after St. Mark’s Cathedral. It is lined with gift shops, music shops, bookstores, restaurants, and cafes, some of them being the oldest in the city, all selling a wide variety of products and tasty treats. There are days when artists set up shop out on the streets and sell their work that includes paintings, photo frames, posters, and handmade items. There are arcades for children and adults to play at and tattoo parlors too.

Go-karting is the most breathtaking activity available at many places in Bangalore, which can be enjoyed with family and friends.

Snow City is a unique, one-of-a-kind amusement located in JC Nagar in Bangalore. Covered in artificial snow and generously sprinkled with snow animal sculptures, toys, and igloos, the theme park is a popular destination for the city folks especially the kids. Besides, the park also has a plethora of swings and slides for the children and a gorgeous snow castle.

Spread across 50,000 square feet, the Indian Music Experience in Bengaluru is the first interactive music museum of the nation that is most innovatively disrupting the conventional notion of museums among visitors. The Museum exhibits everything about Indian music under a single roof, right from classical to folk, regional, and Bollywood.

There are various other places to explore in the beautiful city of Bangalore, like escape rooms at Enigma Cabins for a funfilled adventurous day or Lal Bagh Botanical Garden for a day with nature.

Bangalore is a mix of cosmopolitan and traditional cultures. The list to visit some of the amazing places in Bengaluru is endless. Exploring Bangalore will lead you to some of the most adventurous and fun places and will give you truckloads of memories on their way.

WhatsApp Chat is free, download and try it now here!